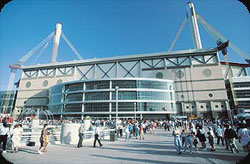 The Alamodome in San Antonio has given sports fans plenty of action. It was the home of the NBA’s San Antonio Spurs from 1993-2000, hosted the San Antonio Texans of the CFL, and in 2005 was the home away from home for the NFL’s New Orleans Saints as they awaited the renovation of their own home stadium. And every year college football fans flock to San Antonio from across the country as the AlamoDome puts on one of the college football post-season’s best shows, the Alamo Bowl.

Opened in 1993 the Alamodome was initially built in the hopes of luring an NFL team to San Antonio. While that hasn’t happened yet the Alamodome could hardly be called a disappointment. Besides the Alamo Bowl, this facility has hosted NCAA Basketball, including the Final Four, a pair of Big 12 Championships, Olympic events, and in 1996, the NBA All Star Game cam to the Alamodome.

And there’s plenty more to come for the AlamoDome. Besides a full array of concerts and other special events, the Dallas Cowboys plan on using the AlamoDome for pre-season training, the NCAA’s Men’s Final Four returns in 2008, and the women’s in 2010, and if you’re a Big 12 football fan make plans to be in San Antonio in 2007 when the Big 12 Championship returns. The AlamoDome is also the regular site of the Texas Football Classic, and the U.S. Army All-American Bowl.

About Tickets Any Event